The Gospel According To John

The Two Comings of Jesus Christ! 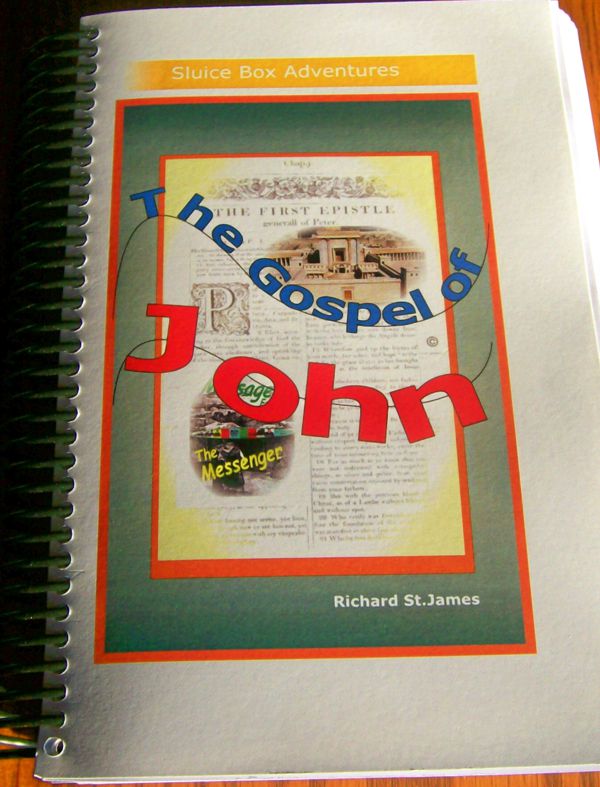 The Two Comings of Jesus Christ!

John 3:17 “For God sent not his Son into the world to condemn the world; but that the world through him might be saved.
18 He that believeth on him is not condemned: but he that believeth not is condemned already, because he hath not believed in the name of the only begotten Son of God.”

The first time Jesus Christ came into the world to minister as the High Priest in our behalf. “For even the Son of man came not to be ministered unto, but to minister, and to give his life a ransom for many.” [Mark 10:45]

Jesus Christ came into the world the first time, not to condemn the world, “but that the world through him might be saved.” [TO SAVE]

The second time Jesus Christ comes into the world is to judge the world. “Because he hath appointed a day, in the which he will judge the world in righteousness by that man whom he hath ordained; whereof he hath given assurance unto all men, in that he hath raised him from the dead.” [Acts 17:31]

The second time Jesus Christ comes into the world is to rule the world in righteousness.

“They shall speak of the glory of thy kingdom, and talk of thy power; To make known to the sons of men his mighty acts, and the glorious majesty of his kingdom. Thy kingdom is an everlasting kingdom, and thy dominion endureth throughout all generations.” [Psalm 145:11-13]

The second time Jesus Christ comes into the world is to restore Israel. “And he said, It is a light thing that thou shouldest be my servant to raise up the tribes of Jacob, and to restore the preserved of Israel: I will also give thee for a light to the Gentiles, that thou mayest be my salvation unto the end of the earth.” [Isaiah 49:6]

You and I were lost.

You and I were dead in our sins.

We were heading … justly … to a devil’s hell. Make no mistake about it, we have to do nothing while here on this earth to end up at death busting hell wide open.

Yes, do nothing and you will end up in the fires of Hell.

We are sinners by birth. We are the sons of Adam. “Nevertheless death reigned from Adam to Moses, even over them that had not sinned after the similitude of Adam's transgression, who is the figure of him that was to come.” [Romans 5:14]

You need to do something to change your destination and coming fate.

You need to jump the track that you are on.

You need a catastrophic event to occur in your life to jump this track.

The quickening spirit of [1 Corinthians 15:45] will “quicken” you. Amen! “Even when we were dead in sins, hath quickened us together with Christ, (by grace ye are saved;)” [Ephesians 2:5]

“For God sent not his Son into the world to condemn the world; but that the world through him might be saved. He that believeth on him is not condemned: but he that believeth not is condemned already, because he hath not believed in the name of the only begotten Son of God.”

If you reject Jesus Christ here in this matter of believing on him, it will leave you remaining on the track to Hell.

You are condemned already.

“But what saith it? The word is nigh thee, even in thy mouth, and in thy heart: that is, the word of faith, which we preach; That if thou shalt confess with thy mouth the Lord Jesus, and shalt believe in thine heart that God hath raised him from the dead, thou shalt be saved. For with the heart man believeth unto righteousness; and with the mouth confession is made unto salvation. For the scripture saith, Whosoever believeth on him shall not be ashamed.” [Romans 10:8-11]

In our Bible Study in John 1:4-9 THE BOOK showed that; “that light” is Jesus Christ … THE SON of GOD.

Verse nineteen gives us the slam dunk truth that men hate GOD [you and I] because “their deeds” are evil. In contrast, “he that doeth truth” is drawn to the light [Jesus Christ – The Word and to the words of GOD – The Bible]

The Basic Truths of Life

Everyone that ever walked on this planet must come to terms in this life with some basic TRUTHS.

These will be the basic truths that no one can argue with, if they are sane.

Of course, if you believe what God says in His Own BOOK about you, then you will have no problem with accepting these basic truths.

1. The Brevity Of Life

"For what is your life? It is even a vapour, that appeareth for a little time, and then vanisheth away." (James 4:14b)

"Is there not an appointed time to man upon earth? are not his days also like the days of an hireling?" (Job 7:1)

He is born, and then he will die!

This is certain! (The exception being Enoch and Elijah, and also, those believers in Jesus Christ who are alive when He comes for His Church.)

2. The Brevity Of Your Remembrance

You will soon be forgotten.

A man is remembered only a little while, and then he is forgotten.

"He shall return no more to his house, neither shall his place know him anymore. Are not my days few? cease then, and let me alone, that I may take comfort a little, Before I go whence I shall not return, even to the land of darkness and the shadow of death; A land of darkness, as darkness itself; and of the shadow of death, without any order, and where the light is as darkness." (Job 7:10 & 10:20-22)

3. The Sureness Of Trouble

Life is bale full of troubles.

I have also found this very true!!!

"Man that is born of a woman is of few days, and full of trouble. He cometh forth like a flower, and is cut down: he fleeth also as a shadow, and continueth not." (Job 14:1).

4. The Verity Of The White Throne Judgment

"And as it is appointed unto men once to die, but after this the judgment" (Hebrews 9:27).

You will not miss this one unless YOU ARE HID in the CLEFT OF THE ROCK!

5. The Eternality And The Finality Of What You Do With Jesus Christ:

We will all be held accountable over this issue.

It is a hard fact of life, my friend.

Now will you take God's offer of eternal life ... purchased by His Son ... for all those who will put their trust in Him ... a thumbs down?

You will everlastingly suffer the consequences!

6. That Men Never Learn From History

We learn from History That Men Never Learn From History!

It is a heart problem!

Men refuse to learn the "lessons" afforded by the light of HISTORY: the recorded historical events which occurred as fulfillment of Bible prophecy.

Now, these are the basic truths with which we all must deal with one way or another!

"But what saith it? The word is nigh thee, even in thy mouth, and in thy heart: that is, the word of faith, which we preach;
That if thou shalt confess with thy mouth the Lord Jesus, and shalt believe in thine heart that God hath raised him from the dead, thou shalt be saved.
For with the heart man believeth unto righteousness; and with the mouth confession is made unto salvation.
For the scripture saith, Whosoever believeth on him shall not be ashamed.
For there is no difference between the Jew and the Greek: for the same Lord over all is rich unto all that call upon him.
For whosoever shall call upon the name of the Lord shall be saved"; [Romans 10:8-13]

A Challenging Quiz for Christians:

Are you a Christian?

Do you know for sure that you have trusted in Jesus Christ as your Saviour and that your death would take you immediately into the presence of God?

If you can answer yes to these questions, then we can certainly rejoice with you. But let me ask you some other questions; questions that I hope you will carefully consider:

A hundred years after you are dead, what will it matter that you ever lived?

Does the devil ever get a report on you from his evil spirits about the trouble you are causing him?
How long has it been since you shed a tear for a lost soul?

What would God have to do to break your heart for Him and eternal things?

Is your life empty or filled with frivolous things? (They are one and the same)

Are you closer to God today than you were a year ago?

Make a list of the things you do that are seen as important in heaven.

Go ahead and make the list. Your record is being kept in heaven anyway. Have you considered what your record looks like?

God established His church in order to correct, challenge, encourage, and guide His people.

In church, believers get to know one another, help one another, and work together to accomplish things of eternal importance. Are you ready to serve God with all your heart?

Do you desire to do something really important; to make a difference? ."

The End of Things For A Man

“Mine age is departed, and is removed from me as a shepherd's tent: I have cut off like a Weaver my life: he will cut me off with pining sickness: from day even to night wilt thou make an end of me.” [Isaiah 38:12]

Have you arrived at this point?

A man or a woman is filled with wisdom … when he or she comes to the LORD and prays like David did in Psalm thirty-nine verse four:

This is prayer: Make me to know my “end” so that I may have knowledge of how weak I am.

If you know your "end", my friend, then your pride will inevitably be weakened.

Humility will become a friend.

Humility will come to live with you.

Listen to what the Spirit of God [through Job] says in Job chapter six, verse eleven:

Do you see what I see?

Job is asking the right question.

You will be wise if you ask the same question.

Job knows that his end is … PEACE.

See this in Job chapter twenty-six in verse ten: “He hath compassed the waters with bounds, until the day and night come to an end.” [Job 26:10]

Next, look at what God gave us [through David] in the book of Psalms. “Mark the perfect man, and behold the upright: for the end of that man is peace. But the transgressors shall be destroyed together: the end of the wicked shall be cut off.” [Psalm 37:37-38]

There is a desired “end” for a man. God desires to give the “perfect man” … “peace.”

Will You Come To Jesus Christ?

Do you believe this scripture, my friend?

Do you sense from within your heart ... the tugging and pulling of the Spirit of God?

The Holy Spirit "will reprove the world of sin, and of righteousness, and of judgment."

Are you under tremendous conviction of sin, and are you mulling over within your heart the TWO WAYS in life that lie before you?

You must make a decision.

It is a matter of whether or not to go to THE STRAIT GATE, or to stay on THE BROAD WAY!

Where are you, my friend?

What will you do with Jesus Christ?

Will you flee from the wrath of God, and go to THE DOOR, and Knock?

If you go through this DOOR you will be on location at Mount Calvary which place is where the weight of your sin will drop off your back at the sight of the ONE who died for you, and WHO shed His BLOOD for you.